“Todo” comments are inevitable part of development. Not all problems can be solved right away and so you find yourself stating //todo in a hope that you’ll come back to it.

In an ideal world these kind of tasks would be captured in your issue tracker and properly scheduled for fixing, but in practice that doesn’t happen. Either because it seems too small, is blocked by something else, or it feels like it contextually belongs next to the code.

Months or years later you encounter the line // todo – fix this but you don’t know how. You reach for git blame only to find that you yourself wrote it. “Curse you, past me!”

It’s important to write todo comments in a way that’ll be most effective in getting them removed later. No todo should be immortal. These are potential practices to help with that aim.

Always begin the comment with // todo – . Jetbrains IDEs such as IntelliJ, PHPStorm and WebStorm recognise this syntax and will highlight the comment differently to a regular comment. If the todo spans multiple lines indent the following lines with at least one space and it will be considered all as one.

The benefit of following a structure the IDE recognises is the tools it can provide. Jetbrains IDEs offer a handy window listing your entire project’s todos. Open it from the View menu: View -> Tool Windows -> Todo 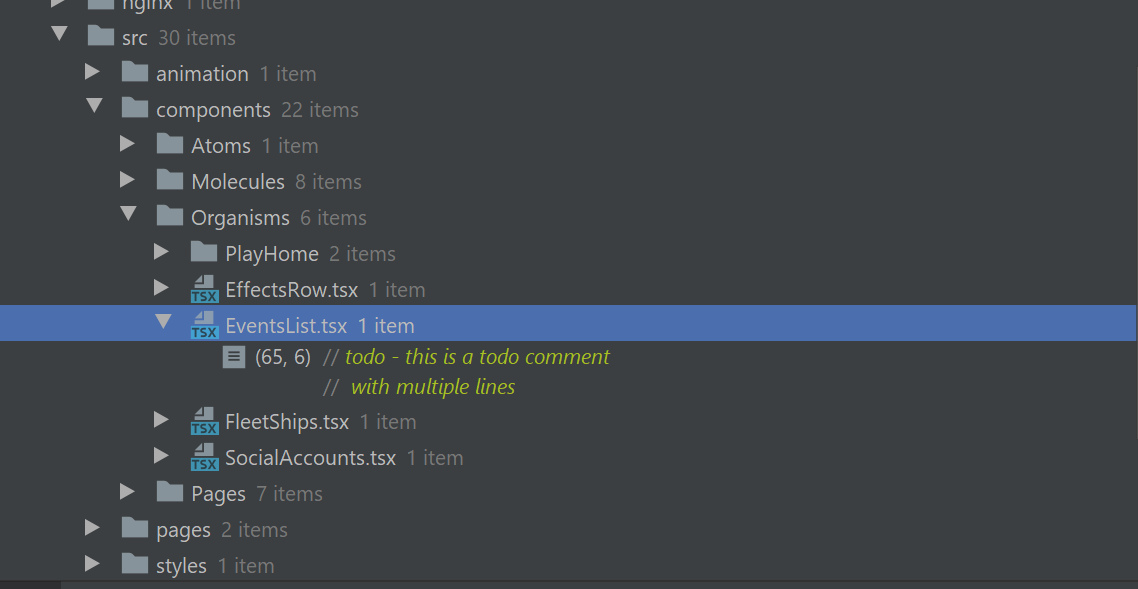 This is a useful way of seeing tech debt all together and gives a good indication of the work that needs to be done.

TODO and FIXME are also recognised as keywords, and this VSCode plugin recognises those, so choose whichever makes most sense for you.

It should hopefully be obvious that the content of the todo comment should be meaningful. Just // todo or // todo - refactor this is going to be a source of pain later down the line. As with good commit messages, you will thank yourself for explaining exactly what needs to be done to resolve this todo.

Imagine yourself reading this one year down the line. Are you going to understand the context of exactly why this todo exists? Or will you just find yourself deleting the comment?

Todos don’t just have to be unknowns to solve some other time. They can be useful during single feature development too. Writing todos inline with your code can be a good reminder to know when your feature is ready or as a brain dump while you work out all the steps you need to write.

You may be working on a feature that requires a user permission check, but want to work on the main bit first. It can be easy to forget to add that restriction and then end up on production without it. By adding a temporary todo, you will see that you have yet to finish when you check your diff before merging or self-reviewing your PR (you do self-review right?). At the very least a colleague should see the comment and ask if you forgot to do this, where they would otherwise have not noticed the missing functionality.

Most todos are designed to be killed. Quite often it’ll be temporary code that needs refactoring or removing later. But sometimes that may involve touching multiple files. How do you remember the multiple locations that need changing when you come to fix the todo later?

You could link todos together with a searchable string, sort-of a hashtag:

The example above shows how code could be improved later, after an impending upgrade. There could be many comments like this throughout the code in different files. By using the tag #node12upgrade they become linked. Now, after the upgrade you can find all related todos to fix.

When reading code if you encounter a todo beginning with one of these hashtags, you know that there must also be a related task somewhere else in the codebase and it is easily findable with a global search.

Sometimes code is written as a temporary shim or polyfill, to get through a phase of development. The cleanup effort later can be as simple as deleting the temporary code; but how do you know later exactly which lines of code to delete if you encounter this:

In the above code how do you know which lines are to be removed once all the users have been migrated. You may accidentally delete too much and break the feature to notifyUsers. You could instead format the todo to wrap the code. A possible syntax to indicate this could be as follows:

As a developer you will come to recognise that the presence of <<<DELETE means there will be a corresponding >>>DELETE later in the code, making it much simpler to remove the legacy code. This syntax should of course only be used if the block can be deleted wholesale without breaking the remaining code.

Remember, there may be tests that would break when deleting this block, so it could be combined with the hashtag to know exactly what to delete in the cleanup phase.

So that’s a few tips for writing effective todos. Obviously you can choose whichever syntax works for you, but if you remain consistent you will feel like they are under control and they will be understandable weeks, months or even years in the future.